Black taffeta with a balloon skirt

In response to yesterday’s post, the fabulous Spiffy Tiffy (a.k.a. Hyena) sent these beauties to me this morning. Thanks to her, I don’t have to attempt to verbally describe the black taffeta chaos (with ruching, a balloon skirt, and a demure sweetheart neckline) that I described yesterday as a dress. You can see it for yourself.

First, a photo of Tiffy and me. Who knows what we were doing or where we were. Judging by the hair, it was at least 10th or 11th grade. I know this for sure because if it was any earlier than that, you would have jumped back from the page a bit by Tiffany’s exploding bangs and curly/fried permed hair. 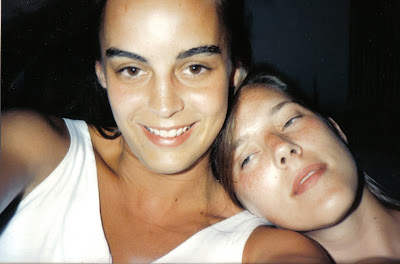 Next, is a photo of that dreadful prom night. Notice the dress? I like the way the camera and the light worked together to pick up the swirls in the taffeta. The camera did not, however, do the balloon skirt justice. That skirt was full and bulbous and absolutely huge. Maybe it was the dress that led me to my cruel and heartless breakup? 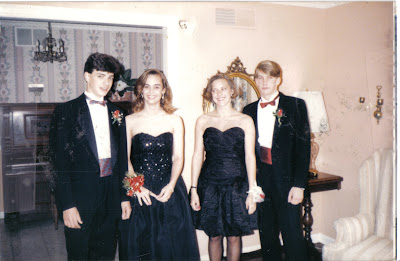 My mom pulled out all of my and my sister’s old dance dresses from the attic a couple of years ago. I tried this one on (it was the only one with elastic – camouflaged by the ruching, of course). It did not fit. Man, I was skinny back then!

And finally, a photograph of me and Chip on prom night 1990. This was a pretty interesting evening/weekend. First of all, Chip had already moved to Nashville. We had been having a long distance relationship for about a year (we hadn’t quite hit the 1 year/5 month mark – that happens when he actually comes back to Memphis for college the next fall). So, Chip is living in Nashville and it is prom season. Because we have a long distance relationship, somehow, Chip needed to get to Memphis for my prom. This led Tiffany and I to the following brilliant idea: Road trip! 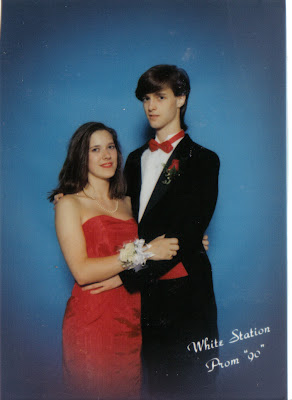 We decided to drive to Nashville on Friday after school and pick him up and return to Memphis in time to get ready for prom (I can’t remember if we drove back immediately on Friday or if we waited until Saturday morning). Because our plan was so last minute, Chip and I had no plans for any of the prom madness. All of our friends were busy getting drunk in their hotel rooms, while Chip and I were stuck way out in Germantown at my parents’ house trying to figure out where to go out to eat while I curled my hair. We decided on Grisanti’s and I think I ate lasagna. This was before I trained my palette to have a little adventure. That night it also poured rain, so my dyed to match red shoes were bleeding all over my cream stockings, and my curling iron curled hair was flat before we got to the restaurant. We had fun though. I recall stopping by Tiffany’s hotel room, but being the only sober ones in the room was not so fun. And I’m pretty sure we had a pretty early night. Gosh, my memory is killing me!

The funniest part of the story occurred on Sunday. We were leisurely hanging around my parents’ house and having a relaxing day when my father asked how Chip planned to get home. Ummm, wha? How is he getting home? I don’t know. We, being the responsible and genius teenagers that we were had not thought about the fact that Chip actually had to get home. It was a school night, so my parents would not let me drive him. My parents would not drive him because they had to work the next day. Chip’s parents would not come pick him up for the same reason. So what brilliant plan did my oh so practical father devise? Greyhound bus, baby. That’s right. I had to drop my boyfriend off at the then scary Greyhound bus station on a Sunday afternoon. I think it was some kind of punishment for us being so stupid. Of course my father drove to the station because, you know, it was in downtown Memphis. Danger! Danger! It wouldn’t be smart to let his 16 year old daughter drive down there in the middle of the day. Of course not. So I watched Chip board the bus, and what normally would have been a less than 3 hour trip by car, took about 20 hours or something like that. I think his bus stopped at every little Podunk town in the 210 mile stretch between Memphis and Nashville. Poor Chip.
Posted by Cathy at 3:07 PM

i am 90% certain that i had that EXACT same black balloon skirt dress the following year, which i proudly wore to both "christmas formal" AND prom. thus, twice as many photos to remind me of it...

My next blog post is totally going to be all about that one time I nailed Neal.

Steph, you crack me up.

Sweetest. Hair. Evar. Skater in the front, partyin' in the back.

It's funny, I have no recollection of that Greyhound bus ride at all-- I think it's something I've blocked out because it was traumatizing.